In Part I we saw that the Lord’s Supper is an actual meal. At the center of that meal is the bread and wine (or the less fermented juice), about which we will talk later. We also saw that this was a weekly meal. It was, no doubt, the way early believers thought of church life together. They would have said, “We come together to eat.”

But Paul also expressed a concern related to that meal that had already caused God to bring severe judgment on the Corinthian church, even death to some of it’s members. We will look at how this judgment unfolds in a later article. Let’s focus on the problem now. What was it that caused the Apostle Paul to say that the Corinthian’s came together for the worse and not for the better? We will call this article, “The Lord’s Supper is a Meal for Intentional Fellowship.” 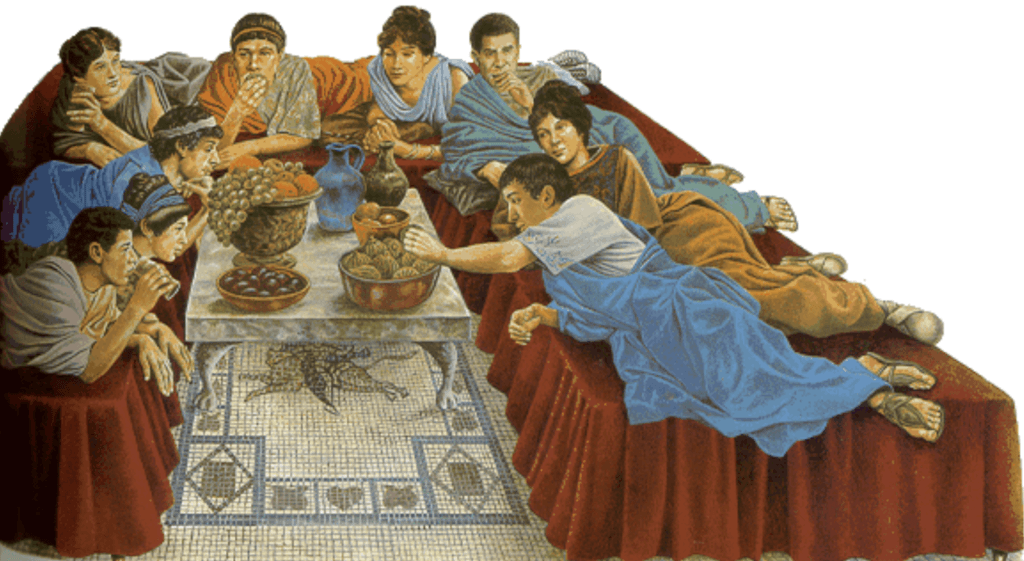 The Lord’s Supper is a Meal for Intentional Fellowship

Go back with me a few years earlier when the first church was birthed at Pentecost in Jerusalem following Christ’s resurrection. Here is what immediately began to characterize the Jerusalem church:

They were continually devoting themselves to the apostles’ teaching and to fellowship, to the breaking of bread and to prayer . . . . Day by day continuing with one mind in temple, and breaking bread from house to house, they were taking their meals together with gladness and sincerity of heart, praising God and having favor with all the people. (Acts 2:42, 46-47)

It is entirely reasonable to read the above passage another way. Rather than seeing four items that the nascent church in Jerusalem devoted themselves to (the Apostles’ teaching, fellowship, the breaking of bread and to prayer), it may be read like this:

They were continually devoting themselves to the apostles’ teaching and to fellowship (that is, the breaking of bread), and to prayer.

In other words, it could indicate that the believer’s fellowship was carried out in the breaking of bread — the meals they shared as new believers in Christ.

It is not possible to make a sure case that these daily meals just after Pentecost were, in fact, intentional communion meals in the way we talk about the Lord’s Supper. This certainly may have been so, however. It is not actually a far stretch to imagine that the believers heard about the “last supper” eaten by Christ and how he magnified his death by assigning new meaning to the bread and wine. It would not have been strange to think that the Apostles, who taught temporarily in the Temple area, could have communicated such things right off. The term, “breaking of bread,” was not necessarily linked only to the Lord’s Supper, however, but to most meals which included others. In fact, the breaking of the bread by the host may indicate the beginning of group meals, thus becoming a one-phrase summary for the concept of eating together.

The important thing to remember from Acts 2, however, is that their eating of meals together is linked to fellowship or the intimate sharing of life together — something believers were to experience on an entirely new level in Christ.

In fact, Jesus talked of warm fellowship in the future world as “reclining at table with Abraham, Isaac and Jacob” (Mt 8:10).  And, the rich man Jesus described in Luke 16 saw Lazarus in the next world “in the bosom” of Abraham, a reference to the way meals were eaten by guests on couches reclining diagonally, so that each person was close to the individual, or in the bosom of the person next to him.

Meals, in other words, were the very definition of the best of fellowship. You cannot do better, as many cultures have found.

Just before Paul’s explanation of the Lord’s Supper and its abuse by the church, he finishes a long section on idolatry comparing the table of the Lord and the table of demons. We see there that the meal associated with sacrifices to idols and with Jewish Temple sacrifices is a “sharing” or “fellowship” meal. Notice the word “sharing” which could be translated as “fellowship” throughout:

Look at the nation Israel; are not those who eat the sacrifices sharers in the altar? What do I mean then? That a thing sacrificed to idols is anything, or that an idol is anything? No, but I say that the things which the Gentiles sacrifice, they sacrifice to demons and not to God; and I do not want you to become sharers in demons.

Paul was making his point about eating meals offered to idols, but here we also see something of the nature of sacrificial meals — when such meats were eaten that had been sacrificed to an idol (or, in truth, a demon), the eater becomes a sharer in that demon; he has fellowship with demons! And, similarly, when we eat meals highlighting the special cup and bread (Christ’s substitute for meat), believers are sharers or have fellowship with Christ, or the body and blood of Christ.

The fellowship experienced is not only vertical with Christ, but also horizontal. “Since there is one bread, we who are many are one body; for we all partake of the one bread.” The eating of the bread represents our union with each other based upon his sacrifice. We eat of the same body of Christ.

It was particularly the failure in horizontal fellowship that Paul addresses in 1 Corinthians 11. When fellowship with others is fractured or forgotten, the Lord’s Supper becomes merely one’s own supper. Worse than that, it brings judgment. The meal associated with the sacrifice of Christ must be about fellowship built upon the death of Christ.

“I hear that divisions exist among you,” Paul reported. No doubt, this information came from Chloe’s people as had all the information he was responding to in the Corinthian letter. Was it the division stated below that he had already alerted them to?

In chapter 11, when writing about the Lord’s Supper, Paul’s concern about division was not about divisions related to the style of leaders like Paul, Apollos, or Peter. No, Paul had finished his straightforward rebuke about the implications of their favorite leader sectarianism in the beginning of the letter in some detail, especially in chapter 3. It would seem strange for him to present it again here as if it had not yet been discussed. The division here had to do with the poor and the rich and how they behaved in the assembly. In particular, most of the wealthier ones would go ahead and eat their meal when the church gathered, with no consideration of those poorer brothers and sisters around them.

I emphasized in my fabricated story about the Corinthian church in Part 1 that nothing seemed out of the ordinary in eating the way they were doing it, separated into groups built upon station in life. This is indicated by the fact that only Paul seemed to see into their problem and the reason for the judgment of God which he will discuss later. Those with plenty of food, the wealthier ones, would eat first without including the others at all. This failure to consider others in the assembly of believers was, to Paul, an egregious sin against the body which in turn received a rebuke that might surprise most Christians.

Let’s look again at what Paul wrote about the problem:

But in giving this [next] instruction, I do not praise you, because you come together not for the better but for the worse.

For, in the first place, when you come together as a church, I hear that divisions exist among you; and in part I believe it. For there must also be factions among you, so that those who are approved may become evident among you.

Therefore when you meet together, it is not to eat the Lord’s Supper, for in your eating each one takes his own supper first; and one is hungry and another is drunk.

What! Do you not have houses in which to eat and drink? Or do you despise the church of God and shame those who have nothing?

We see from these words that the Lord’s Supper must be a meal without divisions. Not getting this right will turn what you think is The Lord’s Supper into your own supper immediately. “For, in the first place, when you come together, it is not to eat the Lord’s Supper, for in your eating each one takes his own supper first; and one is hungry and another is drunk”(v 21, emphasis mine). There was no “second place,” because Paul’s emphasis here was the whole problem. Paul could not praise such action.

Not all the Corinthian believers failed in this way. There were some who were “approved.” The approved ones stood out, or became evident, against the backdrop of those who were living in the old culture rather than the new gospel culture in Christ.

Paul is aghast at what had happened — as aghast as they were clueless.

What! Do you not have houses in which to eat and drink? Or do you despise the church of God and shame those who have nothing? What shall I say to you? Shall I praise you? In this I will not praise you. (1 Corinthians 11:22)

He informs them that if the weekly Lord’s Supper is about you, what you eat and enjoy while disregarding others — if your appetite is what this is all about — then you have homes to eat and drink in. Stuff yourself before you gather, so that the Lord’s Supper can be about fellowship and not about appetite.

These people had turned the fellowship meal of the church, which was at the heart of church life together, into something very selfish. They had shamed those who have nothing by putting their appetites first and forgetting others. They had perpetuated societal divisions and status markers which are brought to dust in the fellowship Christ has created through his death for poor and rich alike. They had forgotten that they were all less than nothing before Christ’s death was applied to them. What a travesty! And they didn’t even see it.

In this section we have seen that the Corinthians had a problem about which they were entirely oblivious. But Paul saw it immediately. To him it was a major abuse of the fellowship that the meal — their occasion for being together — must be all about. Without this fellowship, the significance of the meal was lost and it became merely “their own supper,” regardless of what they called it.

How does this idea of warm fellowship in a meal relate to you and your church? In the practice of most churches, when a tiny cracker and thimble of juice is served, it is the most independent moment in the church’s time together. Fellowship with believers is absent and often no one is even aware it is missing. What should be done about that?

In Part III we will look at this subject: “The Lord’s Supper is a Meal to Proclaim Christ’s Death.”

Read the first of these five articles on the Lord’s Supper here.

Previous
The Lord's Supper is a Meal, Part I
Next
Listen Free to Wasted Faith
Sep 14 Preparing to Be an Amazing…
Loading Comments...