Just a couple of weeks ago, Steve Burchett and I loaded up his van and drove to Oklahoma from Kansas City for retreat with the leaders of a well-known international ministry I won’t name. The trip was pleasant, but when we arrived after several hours, the gate of the retreat center was only partially opened and unmovable. Steve decided to slip through the gate on foot to see who could help us.

He found no one to help. So, returning to the car, we drove around to see if there was another entrance. There wasn’t. We finally got in touch with a retreat center worker. They said that the ministry had been there last week. And, they were planning to be there in another month. Not this week? What’s going on? Steve had the emails with the date and had been in contact with the ministry all week in preparation for the retreat.

We left to get some gasoline. While there I had the best opportunity for evangelism that I’d had in several weeks, with two very interested employees at the station. I got to answer questions and explain a lot. Finally, we were able to locate the ministry’s director by phone. He was totally embarrassed and profusely apologetic. The date had been changed a long time ago but in switching the person responsible for the retreat among their team members, they had accidentally miscommunicated by using the old date. It was an honest mistake. He had wondered what Steve’s text sent earlier—“68 miles!”—was all about.

We turned around and headed home, stopping for a good meal, rejoicing all the way. We weren’t upset about a lost day, because it wasn’t one. Ten hours of great discussions in the van, a wonderful evangelism opportunity which may have been the main reason for the trip, a nice meal, a lesson learned, and the confidence that we had fulfilled the purpose of God for our lives. I’ve done worse some days, for sure.

It’s strange, isn’t it, that sometimes we’re upset about very minor things. I handled this lost day in our otherwise busy lives pretty well, but was very aware that I had been upset about several almost incidental turns in events the week before. It’s almost irrational that little things get us, things not worthy of the expenditure of our negative emotions.

I’ve been following and communicating with a missionary in Indonesia who is very ill. It came upon him after his 23rd bout of malaria. That’s 23! Now his spleen and liver are compromised and swollen, and he seems to get no relief. He left for Bali to see doctors and to recuperate, but no doctor is helping. He is now considering flying to another place for medical help.

In his struggle, he honestly admits that depression has sometimes come along with the wait and pain, yet God opens doors for speaking of Christ and continues to encourage him. It’s a battle with no predictable outcome. He fights for joy and God helps him, but he also sometimes succumbs to the suffering and simply has to be sick and still and wondering.

I pondered how I might react in his condition. I don’t know how I would do. I anticipate grace would be supplied as needed, but who knows what pain or reversals bring? God doesn’t always deliver in the way we expect. God doesn’t always relieve as quickly as we want. Some people die. Some people get sick and don’t get better—for a long time. Some people live daily with the temptation to be utterly discouraged. Some rise above and praise God immediately, some later, some not enough. Most of us will do some of both. We should learn from all this. And we should read David’s psalms to feel the reality.

My wife has been listening to several testimonies about suffering lately, preparing for a retreat. I want to say to her, “Don’t listen to those! God might decide to just make those stories preparation for our own suffering!” In fact, this is likely true in some sense—those stories can be a grace ahead of time for the suffering that certainly will come to each of us. Who will go entirely through life without suffering?

The Hotel at the End of the Trail

We live in Kansas City, the beginning of the West where the Santa Fe trail began. At the end of the trail, the cowboys came into town looking for a hotel and a real bed. Cows are good, cow pies smell sweet (to some people), and the prairie sky is beautiful, but the cow pokes all anticipated the luxury of the hotel at the end of the cattle drive.

Suffering reminds of us of the whole of creation that groans until the resurrection (Romans 8). We aren’t meant to have all the joy here. We look forward to the inheritance, to the glory of Christ and the new world, to the final victory over the last enemy, death. Jesus himself went through his suffering “looking to the joy that was set before him.” Say it aloud: WE AREN’T SUPPOSED TO HAVE IT ALL HERE. We will have trials and difficulties. We can have joy here, yes, but largely because we anticipate unfiltered fellowship and unstifled joy later.

The Man on the Computer

There’s a man across the room here in the coffee shop where I’m writing this. I saw him a few nights ago and hope to get to know him. He’s lonely looking, bent over his computer, just as he was the other night.  He’s gambling online. That’s the real suffering that should concern us the most. Emptiness on the way to damnation—darkness on the way to utter darkness. I would far rather suffer as my friend is in Indonesia with Christ and the confidence of future glory, than the way this man is suffering on his way to hell. Wouldn’t you?

Our team has been blessed with much encouragement from God. But one couple on the team, Kole and Rachel Farney, have had a much larger dose of suffering than the rest. Please pray for them. Rachel is wrestling daily with  an autoimmune disease that leaves her in much pain and consistent need for rest from all activity. She’s no complainer, but with two little ones, the strange pain in her body and the headaches are a trial. Along with this, she suffers from the ongoing effects of a serious car accident a few years ago. Her difficulties, which are ours together as a team, remind us of the better world ahead and the need for daily grace. Some of you reading this have similar and even far worse problems to face. God is there in the trial, but he is especially there at the end of the trail.

We are planning trips now and are open to discuss possibilities for our team to help. We have several retreats before the year is out. Steve will be going to India in January, and I’m working on a trip to Italy and South Africa, the Lord willing. Other stateside ministry trips are on the calendar and in the pipeline. Please pray that we will be faithful to do all this work for the glory of God while we are able and with as much fervor and faith as possible. Pray that all our open dates will be filled and much good will be done. 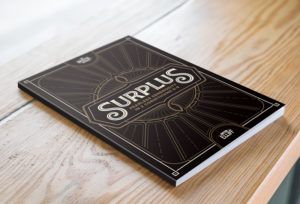 Our new book, Surplus, is getting close to completion. It could be a life changing read for you and a tool you might use to mentor others or work through in your groups. Let’s pray for God’s will to be done through it.

Previous
Authenticating Glory in Scripture
Next
Not Much to Be Thankful For
Yesterday Busy Unlike Jesus
Loading Comments...